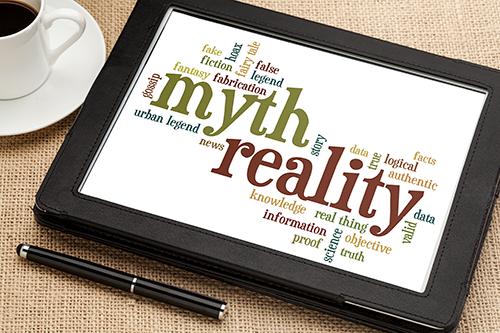 Student loans: If you don’t have them, you know someone who does. And you’ve undoubtedly heard stories of how frustrating they can be to manage. It doesn’t help that there are a ton of myths out there to complicate matters further.

Whether you’re heading off to college soon or already dealing with student loan debt (or you have a child who is), be sure you aren’t duped by these pervasive student loan myths.

Myth 1: You don’t have to worry about making payments while you’re in school.

“The interest accrues while in school and is added to the total liability amount,” said AnnaMarie Mock, a certified financial planner with Highland Financial Advisors in Wayne, New Jersey. That means once you’re done with school and the grace period ends, you will have a larger balance to pay off than when you first took out the loan. Plus, you’ll have to pay interest on the interest.

“During periods of deferment or forbearance, the interest will also accumulate even if payments are postponed,” Mock explained. “Students should understand the difference between subsidized and unsubsidized loans before applying; It can have a significant financial impact.”

Myth 2: Federal student loan consolidation will save you money on interest.

Truth: A lot of times, the terms “consolidation” and “refinancing” are used interchangeably. In reality, they’re two very different things – and only one can result in a lower interest rate.

For federal borrowers who consolidate, “the Direct Loan Consolidation program will take the weighted average of all of their federal loans,” explained Ryan Inman, a fee-only financial planner and founder of Financial Residency, which is soon relocating to San Diego, California.

In other words, your interest rate will end up the same or higher overall, not lower.

Refinancing, on the other hand, involves working with a private lender. “If the goal is to reduce their interest rate, they will need to refinance out of the federal program,” said Inman. However, refinancing federal loans with a private lender means giving up federal benefits, such as income-driven repayment, and programs that allow deferment and forgiveness, so it’s a decision to weigh carefully.

Myth 3: You should borrow the full loan amount offered.

Truth: If your federal aid package comes with the option to take out loans, it means you need all that money, right?

“I have had many clients coming to me with debt disproportionate to their income,” said Lauryn Williams, a Dallas-based certified financial planner and owner of the online firm Worth Winning. “As I started to see this more frequently, I decided to dig deeper … and found the cost of the degree chosen was much cheaper than the amount they borrowed,” she said.

Williams explained that borrowing the maximum available might ease the immediate financial strain of paying for college, but it creates a much bigger strain when it’s time to pay the loan back.

“I suggest taking on employment while in college to cover living expenses and trying to borrow as little as possible outside of actual tuition cost,” said Williams.

Myth 4: All types of loans can be forgiven.

Truth: There are a number of student loan forgiveness programs out there, and they can be a beacon of light for borrowers who are buried under massive amounts of college debt. But before you count too heavily on forgiveness, make sure your loans qualify.

Mike McGrath, a certified financial planner and vice president with EP Wealth Advisors, said that most government-backed loans, such as Stafford and Perkins loans, are eligible for some type of forgiveness program. “However, those generally don’t apply to private loans,” he said.

Unfortunately, if you have private student loans, there’s pretty much no getting off the hook for less than you owe without taking a hit to your credit.

But even some federal loans can have restrictions, such as loans made through the now-discontinued Federal Family Education Loan program. Again, it’s always a good idea to check before you pursue a forgiveness program.

Truth: One of the best-known federal loan forgiveness programs is PSLF, which erases all the student debt of employees who work for a qualifying government, nonprofit or other public service organization after a certain number of payments.

“I frequently hear people talk about the forgiveness program as a ‘10-year program,’” said Bill Nelson, the founder of Pacesetter Planning in Philadelphia.  The reality, he said, is that “forgiveness under PSLF isn’t based on a time period ― it’s based on the number of monthly payments. Specifically, you need to make 120 monthly payments to qualify.”

If you made all 120 payments consecutively and on time, you would qualify for PSLF in 10 years. But not all borrowers do that. “This is particularly common for resident physicians,” said Nelson. “I’ve seen a few cases where they stop making payments for the three-year residency, thinking that they can start the payments after they finish and only have seven years left until forgiveness.”

If you’re going for forgiveness under PSLF and are concerned about making all your qualifying payments in full and on time, consider enrolling in an income-driven repayment plan, which will cap payments at a percentage of your income and make them more manageable.

Myth 6: Your loan servicer is on your side and has the correct information.

Truth: Though you’d expect the company responsible for handling your student loans to know the rules, that’s often not the case.

Student loan servicers are third-party companies that facilitate payments on behalf of borrowers. They’re the ones you make your payments to and work with if you need to change your repayment plan. Unfortunately, they’re notorious for making mistakes and providing poor customer service.

Lucas Casarez, a certified financial planner who operates his virtual firm Level Up Financial Planning out of Fort Collins, Colorado, had personal experience with this problem when he wanted to customize how payments were applied to multiple loans under one servicer. The representative, he said, “informed me that I couldn’t separate out my loans to pay off only the higher interest rates. I knew I could and had to argue with her to speak with her manager.”

“How many times do you think this has occurred to young professionals who didn’t know enough to argue for their student loan to be handled correctly?” Casarez asked.

Unfortunately, the answer is many, many times. Whether you want to make changes to your loan repayment plan or simply get solid student loan advice, take what your servicer says with a grain of salt and always get a second opinion.

Truth: The idea of finally graduating from college and getting your foot in the door of a lucrative career is no doubt exciting. But don’t assume that just because you have a college degree, you’re guaranteed a certain job or salary.

Kate Welker, a financial planner at Irvine Wealth Planning Strategies in Corning, New York, said that students are often misguided when they think loans equal to their expected starting salary will be easy to pay back.

“Students don’t stop to think about the cost of living post-graduation, including housing, utilities, car and cellphone,” said Welker. Plus, “taxes eat up a huge portion of income,” she added.

Welker also pointed out that not all graduates end up in the field they studied or at the top end of that field’s salary range – at least not right away.

Ideally, she said, “while planning for college, a student would look into a realistic starting salary for their chosen career field. The student should then create a mock post-graduation budget, including all expected ‘real life’ expenses, and see how much a student loan payment would affect them.” Once your mock budget is all laid out, you can back into a student loan payment that is realistic.

Truth: You’ve heard the adage before. And when it comes to rationalizing student loan debt, “it takes money to make money” seems to make a lot of sense.

“While that might make sense in business,” said Tommy Martin, CEO and founder of Clear Path Financial Planning in Wallingford, Connecticut, “with college, all it leaves you with is unbankruptable debt.”

According to Martin, more and more graduates are leaving school with too much debt. For instance, one of his clients is a 27-year-old woman planning on getting married in two months. “She has $30,000 of federal student loans and $120,000 of private student loans. She makes less than $40,000 a year,” explained Martin.

He said that even if she had double the income, that amount of debt wouldn’t make sense because there aren’t many solutions to private loan debt other than potentially getting a lower interest rate. “But in this case, that’s not possible. Her debt-to-income ratio is such that no company will refinance that loan,” he said.

With a bachelor’s degree, you could earn 31 percent more than with an associate’s degree, and 84 percent more than just a high school diploma. Unless, that is, your debt far exceeds your ability to pay it back. Student loans can help you afford that degree, but only within reason.

Myth 9: You shouldn’t bother paying your student loans because they’ll always be there.

Truth: Student loans can feel inescapable, especially if you’re facing five or six figures. In fact, Helen Ngo, the founder and CEO of Capital Benchmark Partners in Atlanta, has seen clients with more than $400,000 in debt.

She said people who have very large balances like this often give up and deprioritize their payments.

“I had one client who just completely ignored her loan payments for eight months and it went to collections. I had to sit on a conference call with her and the collections agency and negotiate her payment options,” said Ngo. The balance was settled for half, “but she still had to come up with the lump sum, otherwise they were going to file a suit against her for defaulting,” she said. Not to mention, that client’s credit probably suffered pretty badly, too.

The bottom line is that student loan debt sucks. It really, really does. But you don’t have to be a slave to it, or make your situation worse. There are ways to ease the burden.